This week has shown us both the good and, worryingly, the bad elements of the UK PV industry.  We were asked to visit a site on the west coast of Scotland to offer our support and advise on correcting a dangerous installation on a trapezoidal roof which had failed and resulted in 25 modules along with some mounting rail flying off the roof.

We need to stress that this was a “homemade system” created and installed by a company that has since stopped operating in a clear attempt to save money.  However, this has had the complete reverse effect because now the end user of the solar energy is currently left with the costs of getting a brand new system installed.

This also brings paramount damage to the industry as a whole, which is particularly worse when the industry is still feeling the effects of the current changes to the government’s renewable policies. 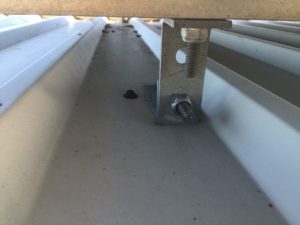 On closer inspection, it’s clear that this “homemade system” is not fit for purpose, dangerous and outright disgraceful.  Galvanised steel fixings were used, which as we’ve stated in previous articles are inappropriate as they cause corrosion when used with other materials.  Instead stainless steel should have been used.

It doesn’t appear that there was any separation layer between the fixing or the roof, which has also damaged the roof and helped to spread the corrosion to its surface.  Furthermore, the fixings were wrongly fitted through the trough of the trapezoidal crown, instead these should have been installed through the crown.

There was also a distance of 2.0m between these fixings, which meant the overall system didn’t have enough fixings to overcome the wind uplift and therefore came off the roof. 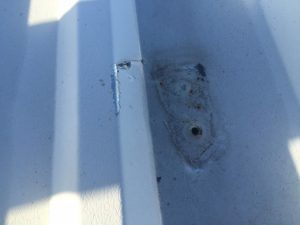 We’re working with a credible installer to ensure an appropriate system is calculated, supplied and installed.

These images provide a reminder of the long term cost of choosing “cheaper methods”.  They also show the important value of sourcing quality systems which are appropriately designed with competent installation that are vital to the industry, to allow it to grow and flourish as we all want it to.

We know that the less than credible people in our industry are now in a minority and that the vast majority rightly strive for things to be done in the right manner and our commitment to this is unwavering.