One of our latest solar PV mounting systems has just been successfully installed by a group of volunteers from the charity Team Rubicon for a small village, which is isolated in the mountains of Nepal.

In April 2015, Nepal was hit by a devastating earthquake, which measured 7.8-magnitude and had an epicentre located roughly 80km from the country’s capital Kathmandu.  There were a high number of casualties with homes, education facilities and sacred temples totally destroyed across the Gorkha region and surrounding areas.  This included an isolated village, with a population of 3,000 people, called Lapubesi.

Located in the mountains of the Gorkha region, close to the earthquake’s epicentre, Lapubesi’s local community suffered a loss of 16 people and virtually all buildings, including homes and schools, were completely destroyed.  It takes a couple of hours to trek on foot to reach the village, which means getting aid there quickly during the immediate aftermath proved extremely difficult.  While global aid was still being organised, the villagers erected temporary homes, shelters and even a school with future plans to rebuild more permanent structures at a later date. 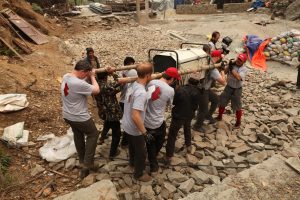 Team Rubicon, a charity made up of military veterans and first responders, sent a group of volunteer’s to Lapubesi to offer their assistance in the rebuilding of these permanent structures.  The group also had a special VIP volunteer join them for their two week stay, as Prince Harry helped to lay the foundations for a new school and to install a solar PV system. 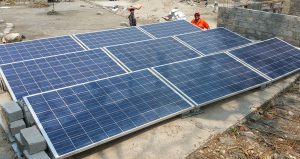 We are pleased to have donated the solar PV mounting system to Team Rubicon via ex Infantry Officer Nick Spicer, COO of Your Power, which uses our Light Tegra ballasted solution and provides the ideal platform for the 16 solar panels.  The Light Tegra supports have been anchored down to the hard mountain rock surface using a mixture of specially designed mechanical fixings and additional ballast.  This renewable energy system will now supply the local community with 4kWp of sustainable electricity.

On behalf of all of us here at SUNFIXINGS, we would like to extend our appreciation and admiration to the dedicated groups of volunteers at Team Rubicon for all the hard work and aid that they provide to areas stricken by natural disasters.  We would also like to wish the local community in Lapubesi all the best for their future rebuilding plans.

To find out more about the types of projects that Team Rubicon get involved with or to find out more on how you can become a part of their team, click here.